Posted by Jerry Barker at 09:30 No comments:

I recently recorded a podcast with Ryan Maughan of AVID Technology. You can find the podcast here:

or via the AVID Technology webpage, which also has the links to the various platforms at the bottom of the page.

https://avidtp.com/ep63-interview-jerry-barker-faradion/
I managed to talk about everything regarding the development of Li-ion and Na-ion batteries, plus a bit about photovoltaics and conducting polymers.

Posted by Jerry Barker at 20:24 No comments:

Yesterday (November 26) I participated in the Faraday Institution's annual conference for 2020. This year's conference was delivered on-line:

I gave an invited presentation in the session entitled Pathways to Commercialization and early Faraday Institution Successes, chaired by Ian Ellerington. Here is the first slide: 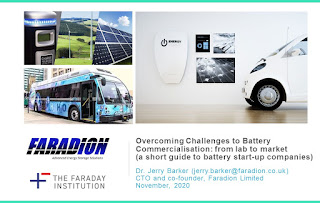 Posted by Jerry Barker at 11:17 No comments:

Sodium-ion batteries can get ahead in the power game

Hiya,
Here is a link to a good recent article in The Engineer on Faradion and its Na-ion battery technology.
https://www.theengineer.co.uk/sodium-ion-battery-manufacturing-faradion/#comment-337869
Dr Chris Wright, who was one of the pioneers of commercialising lithium-ion technology, saw potential in sodium-ion in 2011, and co-founded Faradion with Jerry Barker to develop sodium-ion technology and bring it to market. After announcing our first major orders from ICM Australia, then for heavy-goods vehicles in India with Infraprime Logistics Technologies in June, we’ve had nearly 120 requests for partnership in the period of just four weeks. 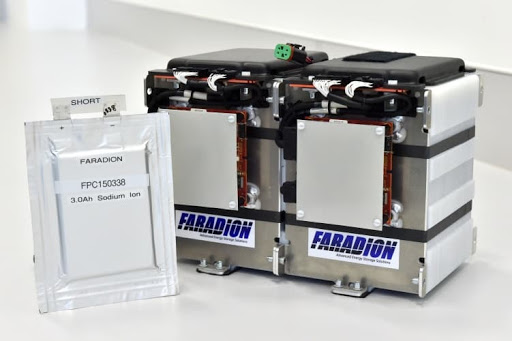 Cheers!
Jerry
Posted by Jerry Barker at 13:46 No comments:

Here is a summary graphic of my career commercial highlights - starting with the electrodeposition of II-IV compound semiconductors for BP Solar in the early 1990's up until the present-day Na-ion Battery Technology at Faradion. I decided to include the Tiamat highlight as this company is using my NVPF cathode material - discovered and patented during my time at Valence Technology in the early 2000's. 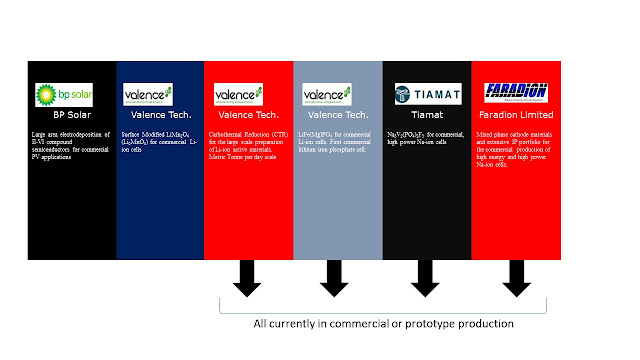 It has been quite an eventful ride - but that is 6 commercial successes so far. There must be one or two more still to go!

Cheers, Jerry
Posted by Jerry Barker at 15:46 No comments:

ACS C&EN article: Can Europe be a contender in electric-vehicle batteries?

Nice article in ACS Chemical and Engineering News (July 13, 2020) by my friend Alex Scott on the current status of Li-ion manufacturing in Europe:

Today, Europe’s share of that market is a mere 3%. But with the battery making up about 40% of the value of an electric vehicle, Europe is waking up to the notion that whoever controls a region’s lithium-ion battery supply chain also wields much control over its lucrative car industry and the hundreds of thousands of jobs that go with it.

Some nice quotes, later in the article (where does Alex get these from?):

The challenge for the UK, as with other European countries, is that it has to put together a battery supply chain that Asian producers already have in place.

“We rely on supplies of some of the critical cell components and precursors from the Far East,” says Jerry Barker, chief technology officer for the UK sodium-ion battery firm Faradion. “It would be far better if we had a reliable, local, UK-based supply chain for cathode, anode, and electrolyte as well as the cell hardware such as separator and current collectors.”

Jerry
Posted by Jerry Barker at 14:34 No comments:

Led by my good friend and colleague, Professor Maria Forsyth, the StorEnergy training centre aims to challenge existing thinking and expand Australia’s capacity in energy storage and production. The centre will create new knowledge and intellectual property in advanced energy materials, batteries and battery-control systems for integration into end user industries.
Working with 14 organisations across government and industry, and four other Australian universities, researchers at the centre will facilitate small to medium-sized enterprises to take a global leadership role in advancing and producing new age storage technologies. By harnessing the expertise of researchers and industry partners, the StorEnergy centre aims to deliver benefit to our economy, the community and the environment.
I am on the advisory board - but looking very serious:
https://www.storenergy.com.au/about-us/people/
Posted by Jerry Barker at 10:20 No comments:

SHEFFIELD, England, June 4, 2020 /PRNewswire/ -- Faradion Ltd., the British company that is a world leader in sodium-ion battery technology, has announced a new partnership with Infraprime Logistics Technologies (IPLTech) for its high energy sodium-ion batteries for use in commercial vehicles in the Indian market.
The news comes just a few weeks after Faradion's first major order from Australia and reflects its entry into one of the most exciting electric vehicle markets in the world.
India has demonstrated a growing appetite for moving towards electric commercial vehicles, driven by the Government's target of 30% electric vehicle adoption by 2030. It has given a significant push to infrastructure by allocating $1.4 trillion for infrastructure to be invested by 2025. This is higher than the UK ($35 billion) and the US ($500 billion) in the same period. Each day, 40km of highways are constructed in India and the market for roads and highways is projected to grow at an annual rate of 36% from now to 2025.
Faradion's sodium-ion technology provides similar performance to conventional chemistries, while replacing expensive materials such as cobalt and lithium with the far more abundant sodium. Unlike lithium-ion batteries, Faradion's sodium-ion batteries have exceptional thermal stability and safety. Further they can be safely transported and maintained at zero volts.
IPLTech is a Gurgaon-based heavy goods vehicle fleet service provider that is halving the cost of infrastructure development.
Siddhartha Das Executive Chairman IPLTech said, "We are driven to minimise the heavy pollution caused by heavy goods vehicles in India. Our full electric mega trucks are the first of their kind to be integrated and deployed in India. We believe that the Faradion technology can provide the Indian market an effective solution at competitive prices," Sid said.
Faradion has seen significant interest in several markets, including the US, Europe and Australia due to its performance, safety and price point. Mr. James Quinn, CEO of Faradion says India was the next logical region for Faradion, given the market conditions.
"Faradion is accelerating large scale industrialisation of its safe, low cost, Sodium-ion energy storage technology. The partnership with IPLTech reflects an important milestone in our commitment to the market and the Prime Minister's Make In India vision, as we also shortly commence manufacturing in India."
For more information on Faradion please visit https://www.faradion.co.uk/
Posted by Jerry Barker at 13:49 No comments:

Although Li-ion batteries are currently the dominant technology in the rechargeable-battery sector, sodium-ion (Na-ion) batteries possess many benefits in terms of sustainability, safety and costs, and are poised to greatly expand their commercial usage. Sodium-ion battery specialist Faradion Ltd. (Sheffield, U.K.; www.faradion.co.uk) — in its largest commercial deployment ever — will provide Na-ion batteries for energy-storage applications in Australia.
Previously, the company had undertaken several prototype demonstrations, including electric bikes, golf carts and small-scale domestic storage applications, but the project in Australia represents a larger magnitude for Faradion’s Na-ion technology, explains Jerry Barker, chief technology officer and co-founder of Faradion.
“Our cell chemistry is based on a proprietary Na-layered oxide cathode. This chemistry provides a world-leading cell specific energy of 150–160 Wh/kg,” says Barker, adding that the company expects to generate cells with greater than 190 Wh/kg specific energy within the next 9 months. Another benefit of Faradion’s batteries is that they can be produced on existing Li-ion manufacturing lines. Faradion has worked closely with Haldor Topsoe A/S (Lyngby, Denmark; www.topsoe.com) in scaling up its proprietary cathode material. With comparable cycling and temperature performance, Na-ion batteries also provide improved thermal stability and safety when compared to conventional Li-ion batteries — Faradion has patented a method for the transportation and storage of Na-ion cells wherein cells can be transported without the risk of overheating or exploding. Faradion’s batteries are anticipated to enter the Australian market later this year.
Posted by Jerry Barker at 09:18 No comments:

Just wanted to include a summary slide on my career highlights: 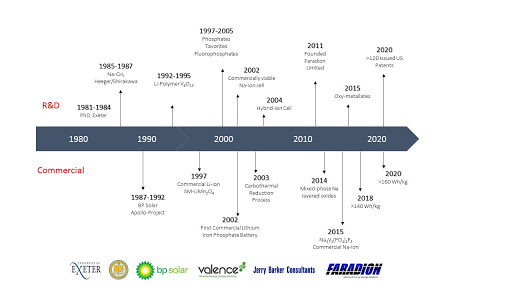 This shows the important milestones, in terms of R&D projects and commercial successes, I have enjoyed since my PhD in 1984. How time flies! My apologies for this being an eye-test - but just click on the image to get a full-size version (much easier to read!).

Cheers! Jerry
Posted by Jerry Barker at 14:48 No comments:

Jerry Barker is currently co-founder and CTO of Faradion Limited, a UK-based start-up company specializing in next generation Na-ion battery technology. The company has state-of-the-art R&D labs and prototype manufacturing facilities in the UK. Check out the company website here:
http://www.faradion.co.uk/
In May 2019, Jerry was appointed Honorary Professor within the School of Chemistry at the University of St. Andrews.
Jerry Barker was formerly an independent technology consultant, specializing in the energy storage sector. He has worked in the UK, Denmark and the US and has managed materials research labs in Europe and North America. He is currently located in the UK where he has consulted for, and advised a number of battery R&D companies, varying in size from small university startup to global multinational. He has also consulted and advised on solar photovoltaics (PV) where he is widely regarded as a world expert on the electrodeposition of thin film semiconductors for PV and other applications. In his early career Jerry spent time at UCSB where he collaborated with the Nobel prize winners Alan Heeger and Hideki Shirakawa on alkali metal doped polyacetylene.
Jerry has published extensively in the energy storage area (h-index = 56, total number of citations >10,000) and is a named inventor on more than 120 issued US patents. He has appeared as a patent litigation expert witness in Europe and in North America. He has also acted as the due diligence technical expert for a number of VC-backed startup companies. Additional information on Jerry's background may be found at the website:

Jerry currently acts as an Expert Panel member for the UK's Faraday Institution and as a Board Member of the UK LiBATT consortium.
The articles and comments posted on this blog will simply be Jerry's own personal opinions. Much of the emphasis will be placed on the recent news stories involving Energy Storage Systems - especially Lithium metal anode, Lithium-ion and Sodium-ion Batteries - and Thin-film Photovoltaics.

Please feel free to add useful comments and suggestions - these will help to keep the discussions alive. I will try to respond to these postings as they are made.